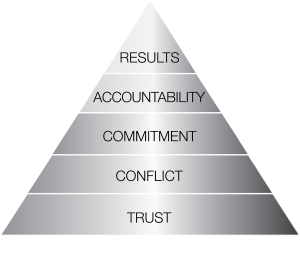 We live and work in a world of exponential change. Sometimes there is so much change going on around me that it reminds me of being sea sick. I just want the boat to stop rocking – even for a minute. This of course is not possible because even if the captain stopped the boat it would continue to rock. The only way to avoid the turbulence would be to abandon the trip. Which doesn’t get you to where you want to go!

In the world of work, there is no greater threat to an organization’s success than the inability to adapt to the changing environment in which it operates. Yet many leaders find themselves constantly struggling to implement the change initiatives necessary for their organizations to remain competitive.

In his book, The Power of Habit, Charles Duhigg introduces the concept of a keystone habit or what I call a keystone focus. It is one thing that an organization can focus on that will have ripple effects in all areas of the organization. When it comes to change and many of the other factors an organization needs to remain competitive including employee engagement and innovation, my experience has shown that the keystone focus is building cohesive, high-functioning teams.

Patrick Lencioni, author of the best-selling book, The Five Dysfunctions of a Team, says “It is teamwork that remains the ultimate competitive advantage, both because it is so powerful and so rare.”

1. A Focus on Desired Results. People need to understand what you want to accomplish and why. To be successful, everyone must pull together in the direction of that desired result

2. A Culture of Trust. This starts by helping people see the vision. Vision lights the way to proceed with a greater sense of safety. Most of us aren’t willing to jump on board without at least an idea of where we are going. And despite my mother’s assertion that, as a teenager, I would jump in the car and then ask, “Where are we going?” Even I did that only when I had a high level of trust and a belief that where we were headed was good. A culture of trust also makes it safe for people to ask questions, express concerns, and challenge assumptions.

3. Healthy Conflict. Healthy conflict is about passionate dialogue and debate. It is critical to successful change initiatives for at least three reasons. First, to commit to a change initiative people must have the opportunity to share their ideas and express their concerns. Second, change initiatives require a plan of action for achieving the desired results. Healthy conflict leads to the development of action plans that are both better and more likely to be implemented. Dialogue and debate lead to new and better ways of doing things because full potential cannot be realized in a serene environment. Third, healthy conflict helps avoid the dangerous pitfall of group think.

5. Accountability. To accomplish the desired change, not only must team members be committed to it, they must be willing to hold one another accountable to achieving the outcome. This can only be accomplished when there is a high level of commitment to the desired result.

As you may have recognized, these five requirements for implementation of successful change initiatives are also the five behaviors of a cohesive, high-functioning team addressed in Lencioni’s Five Dysfunctions of a team model and The Five Behaviors of a Cohesive Team program that is based on Lencioni’s work.

Would you like to learn more about harnessing the power of your team to successfully implement change initiatives?

If you are in the Dallas/Fort Worth area join us for a complimentary Executive Briefing: The Change/Teamwork Connection on Wednesday, October 7. Click here for more information and to register.

If you can’t make the October 7 briefing and want to know more, email Julie Chance at jchance@action-strategies.com or call her at 972-701-9311.