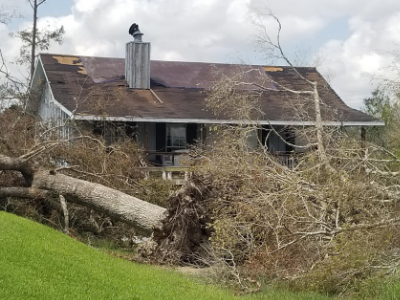 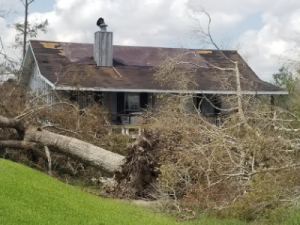 The eye of Hurricane Laura passed directly over my parents’ house during the early morning hours of August 27. While they had relatively moderate damage compared to others in the area and certainly than those in hard-hit Lake Charles, their home and property did not escape unscathed.

I spent most of the two weeks after the hurricane helping them with recovery. During the process I marveled at the outcome of what appeared, from my perspective, to be both excellent and ineffective leadership. And I gained some leadership insights of my own.

The Power of a Clear, Common and Compelling Purpose

As I drove into the area the Sunday following landfall, I was astounded at the damage, especially to trees and electric poles and lines. Regardless of the road I was on, I did not see a single pole that was not damaged or a line that was not broken. The lines dangled overhead or laid across the road. Crews identified damage to approximately 1,600 transmission structures, 6,600 poles, 330 miles of distribution wire and nearly 2,900 transformers.

At one point, as many as almost 15,000 people from 30 states were in southwest Louisiana repairing the lines and structures. That does not count the people in the background doing the planning and coordination or the truckers bringing in the new materials. I marveled at the coordination, collaboration, and logistics that it takes to lead this number of people, many who do not know the area, with virtually all street signs down, limited communication, and GPS that may or may not have been working.

Yet when I left two weeks later, virtually all the poles and lines on the roads I traveled had been replaced and electricity was flowing to much – although not all – of the area. A testament, I believe, to both the effectiveness of leadership and the dedication of the team on the ground – all of whom had a clear, common, and compelling purpose: Restore power to as many people as possible as quickly as possible.

I hope the people leading this effort will one day share their experience with us so we can all learn from it.

When We Fail to Take Time to Problem Solve and Plan

On the other end of the spectrum was the propane company responsible for filling the propane tanks in the area to keep customers generators running. This company exhibited, from my perspective, a lack of communication, collaboration, coordination, and ultimately leadership, leaving customers unsure of if or when they would receive propane.

To be fair, every single person associated with the propane company likely had damage to their homes and property and they were operating under extremely difficult and stressful circumstances. I witnessed first hand what a high level of stress does to logic and problem-solving skills. The team was no doubt running as fast and as hard as they could from dawn to dusk. Yet that frenetic level of activity was not effective in meeting customer needs.

Even given the difficult circumstances, if they had taken just a little bit of time up front to problem solve and plan they could have likely more effectively met the needs of their customers. For example, companies in the surrounding areas that were not affected were granted emergency permission to fill tanks that did not belong to them. Customers could have been segmented into groups based on geography and assigned to other companies on a temporary basis. The answering service could have then referred customers to these other companies.

Or the answering service could have been instructed to tell customers that the company was unsure when they would get to them but that other companies had been granted permission to fill tanks in the area and provided a list of these companies. None of this happened. Instead messages were taken with promises of call-backs that never happened. Customers were left to fend for themselves, unsure about whether to schedule with another company because they didn’t know when their own company might show up.

The lesson for us as leaders is that even in urgent or emergency situations we must get out of fire-fighting mode long enough to develop a plan of action. By slowing down, we can be both more efficient and more effective. For those of us who are small business owners, there is also a lesson in the need to build relationships and collaborate with other businesses in our industry, possibly even competitors so we can make sure our customers’ needs are met even in a time of crisis.

Emptying a Swimming Pool with a Teaspoon

The original plan was for my brother and I along with my niece and nephew to clean up what we could of the tree damage in the yard. It was extensive. As I began the process, it became clear that doing this on our own, with the tools and expertise we had, was going to be like emptying a swimming pool with a teaspoon. We could have spent days working and we still weren’t going to be able to do everything that needed to be done.

We ultimately hired professionals to clean up the yard as well as remove the tree branches from the roof. As this process unfolded I wondered how often we put our team members in a position where we are asking them to do things without the proper tools or skills – leaving them feeling like they are trying to empty a swimming pool with a teaspoon?

The Road to Recovery is Long

While much has been accomplished over the last few weeks, it is important to remember the road to recovery for southwest Louisiana is long and many are still suffering.