The Five Behaviors of a Cohesive Team ™, based on the Five Dysfunctions of a Team model developed by Patrick Lencioni, is a program designed to help teams learn how to work more effectively by improving five core areas of teamwork: Trust, Conflict, Commitment, Accountability and Results.

Last month we talked about Trust, the foundation of truly cohesive teams. Trust occurs when team members feel safe and supported by one another. If you haven’t already, take a look and read our post on Trust.

The next tier of the Five Behaviors ™ is Conflict. In this model when Trust is established, teams are “not afraid to engage in conflict around ideas that are key to the organization’s success.”

What Is Healthy Conflict?

Healthy conflict occurs when teams feel safe enough to disagree, challenge and question one another. They engage in conflict to find the best solutions and answers to their problems.

Healthy conflict can inspire new ideas and creativity, as well as improve problem-solving and bring teams closer together. Conflict that involves finger pointing, blaming, criticizing or demeaning other team members is not beneficial, nor does it create the sense of psychological safety necessary for people to perform at their best

Harmony May Be Hurting Your Business.

What is your reaction when you hear that statement?

If you’re like some of the teams I work with, you might be scratching your head. Aren’t teams supposed to work in harmony? To that I say, yes and no.

Recently I was working with a team who was trying to improve communication between themselves and senior management during their monthly performance review meetings. The method we used to evaluate the level of buy-in to a potential decision is called “Fist to Five.”

The “Fist to Five” method meant each person indicated their level of support for a decision by raising 0-5 fingers. If any team member raised two fingers or below, there would be additional discussion.

During one session, a single group member held up two fingers, while the rest held up four or five. A lively discussion ensued, as the team was committed to identifying the hesitation in their team member and finding an optimal solution. Several others chimed in with additional concerns, as a collective effort ensued to develop a new and better solution to their problem. Without the willingness to engage in healthy conflict, they would have never developed what ultimately was a better plan.

The critical factor here was the pre-existing baseline of trust, which allowed that one team member to feel safe in speaking up, even when their opinion went against the group’s.

Every single person on your team has a different set of values, beliefs, experiences and perspectives. While some of these may overlap, each person has something unique to bring to the table. These differences are what lead to conflict. If your team uses conflict constructively, it can be a tool, not a roadblock.

Optimal solutions are not developed in a serene environment. Conflict often arises during period of change; when your team grows, new systems are put in place; or, when your company moves in a new direction and procedures need rearranging. Changes are good and yet bound to bring up some disagreement.

Use moments of disagreement to your advantage by seeking new and better ways of doing things. Conflict also invites more discussion and can bring team members closer together.

Leaders must be prepared to step out of their comfort zones, and not only allow debate and dialogue, but actively seek it out. The minor discomfort that can sometimes arise from disagreement will be well worth the outcome.

There is a process for developing healthy conflict, and it’s one that I’ve used with teams for years. It starts with being willing to allow everybody involved to express their viewpoint.

If you want to learn more about using The Five Behaviors of a Cohesive Team ™ to encourage healthy conflict in your team, I can help.

Let’s schedule a conversation to explore how The Five Behaviors ™ can be implemented in your team. 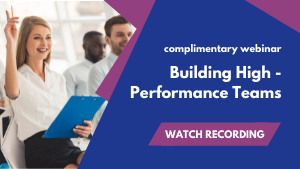